The writer is the tool

a story uses to tell its tale

T, a paranormal romance and urban fantasy author, feels writing is not a calling so much as it is a compulsion. No one is more surprised than she is when characters take over the plot and dialog, (re)directing stories in directions she had not (consciously) intended. Although T starts out each novel with a basic outline, she finds one or two chapters into her novels, not only have the characters shredded her outline into tiny unidentifiable pieces, they use the resulting confetti in a nose-thumbing parade. 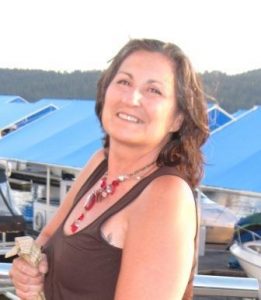 Since elected as the Duoviri-the embodiment of sheriff and criminal court-Lexa has unlimited power as judge, jury, and executioner of supernaturals who call themselves the Eximium. The Posse, consisting of Lexa, Etienne, Yasmin, and Jade, keep peace, negotiate treaties, and bring criminals to justice.

Lexa: a shapeshifter sheriff who leads a posse of supernatural warriors.
Etienne: a Knight Templar, turned master vampire.
Yasmin: a dragon who walked among the gods.
Jade: Legends historian, and  Fox-familiar to a cranky dragon.
Sentinel: a gargoyle who mourns the fall of Atlantis.
Richard: a witch with a target on his back.
Tris: a rare polyshifter with an eye for a sexy male.
Rhys: four months ago he was human…

Teresa March, blinded in an accident, discovers she shares a telepathic link with her German shepherd, Red. His thoughts, presented in droll, unfiltered commentary, brighten her days and open up a surprising career opportunity. As Team Red, they work with the police and military to uncover forensic clues in investigations.

And what’s a romance without a love triangle? Two ex-military men, Bastian, and his partner David, have moved to Spokane. Specializing in security systems and topographical mapping, their company, PreClan, is working on a sensitive project for the military, which puts Teresa’s safety in jeopardy. Despite looming deadlines, neither man is too busy to compete for her affections, resorting to a game of one-up-manship and guerrilla tactics to win her heart.

The Team Red series brings you Laugh-Out-Loud, extra-spicy romance with a paranormal twist. Team Red books contain a feisty blind woman with a sassy attitude, a snarky German shepherd who stalks low flying objects (and the occasional cat), two sexy retired Navy men with a talent for tactical planning, a man-cave with secret tunnels and classified military toys, Marilyn Monroe and other celebrity voices, and a herd of Mustangs (okay, maybe “herd” is a slight exaggeration).

This series is INTENDED FOR MATURE ADULTS OVER 18. Sexual situations and adult language (which is unfortunate, as the dog repeats everything).

released and coming up…